Lotus Cars is a British manufacturer of sports and racing cars. Lotus Cars was founded by Colin Chapman in 1952, and the Lotus Logo includes his monogram: ACBC stands for Anthony Colin Bruce Chapman. The original name of the company was Lotus Engineering Ltd and Colin Chapman was a highly regarded influential engineer. He was the son of an inn-keeper and studied structural engineering at University College in London. While in school, the joined the University Air Squadron and became a pilot. 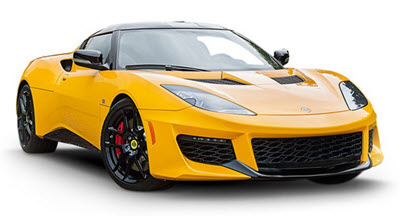 Lotus Cars are based in Hethel, near Wymondham and roughly 10 miles (16 km) south of Norwich in England, UK. The first Lotus factory was located in old stables situated behind the Railway Hotel in Hornsey, an inner-suburban area 5 miles (8 km) north of Charing Cross in London. In the 1960s, the company got a modern factory and a road test facility at Hethel. Earlier, the factory site was the RAF Heltel base and the Lotus test track uses sections of the old runway.

Lotus is famous for designing and building both race and production cars that are extremely low weight. A Lotus car has amazingly good handling characteristics. Lotus is also famous for having a Formula One team that has managed to stay active and competitive from 1958 to 1994. Lotus won the Formula One World Championship no less than seven times. In the meantime, the Lotus company produced tens of thousands of Lotus road cars.

Lotus played an essential role in the popularisation of the mid-engined layout for Indycars and created the very first monocoque Formula 1 chassis. Lotus is also responsible for integrating the engine and transaxle as chassis components. In addition to this, Lotus invented active suspension, was one of the pioneers of winged Formula One cars (the wings creates a much-needed downforce) and was the first manufacturer that moved the radiators to the sides (this improves aerodynamics).

In 1982, Colin Chapman died of a heart attack at the age of 54. Four years later, the company was purchased by General Motors. In 1993, General Motors sold Lotus Cars to A.C.B.N. Holdings S.A. of Luxembourg for £30 million. A.C.B.N. Holdings S.A. of Luxembourg was controlled by Romano Artioli, an Italian businessman who also owned Bugatti Automobili SpA. Three years after the purchase, a majority share in Lotus Cars was bought by Perusahaan Otomobil Nasional Bhd (Proton). Perusahaan Otomobil Nasional (Proton) is the Malaysian national carmaker, and the holding company for Proton is Proton Holdings Berhad.

Lotus is today divided into Lotus Cars and Lotus Engineering, which together form the Group Lotus. Rumours about the creation of a new Formula One Team are always circulating, but nothing has been confirmed. In 2006, Mr. Michael J Kimberley became the Acting Chief Executive Officer and he currently chairs the Executive Committee of Lotus Group International Limited (“LGIL”). This entity was established in 2006, and Kimberley chairs together with Syed Zainal Abidin, the Managing Director of Proton Holdings Berhad, and Badrul Feisal, the non-executive director of Proton Holdings Berhad.

Today, Lotus does not only produce Lotus cars, it is also active as an engineering consultant for other car manufacturers, especially in the field of suspension. There is also a Powertrain department that has designed and developed a 4 cylinder engine used by General Motor’s in many of their Opels, Saabs, and Vauxhalls.